Did the Wrong People Die? 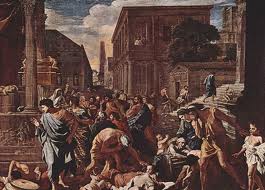 In today’s blog, I want to take a look at a story found in 1 Chronicles.

3 But Joab replied, “May the Lord increase the number of his people a hundred times over! But why, my lord the king, do you want to do this? Are they not all your servants? Why must you cause Israel to sin?”

4 But the king insisted that they take the census, so Joab traveled throughout all Israel to count the people. Then he returned to Jerusalem 5 and reported the number of people to David. There were 1,100,000 warriors in all Israel who could handle a sword, and 470,000 in Judah. 6 But Joab did not include the tribes of Levi and Benjamin in the census because he was so distressed at what the king had made him do.

7 God was very displeased with the census, and he punished Israel for it. 8 Then David said to God, “I have sinned greatly by taking this census. Please forgive my guilt for doing this foolish thing.”

9 Then the Lord spoke to Gad, David’s seer. This was the message: 10 “Go and say to David, ‘This is what the Lord says: I will give you three choices. Choose one of these punishments, and I will inflict it on you.’”

11 So Gad came to David and said, “These are the choices the Lord has given you. 12 You may choose three years of famine, three months of destruction by the sword of your enemies, or three days of severe plague as the angel of the Lord brings devastation throughout the land of Israel. Decide what answer I should give the Lord who sent me.”

14 So the Lord sent a plague upon Israel, and 70,000 people died as a result. 15 And God sent an angel to destroy Jerusalem. But just as the angel was preparing to destroy it, the Lord relented and said to the death angel, “Stop! That is enough!” At that moment the angel of the Lord was standing by the threshing floor of Araunah the Jebusite.

16 David looked up and saw the angel of the Lord standing between heaven and earth with his sword drawn, reaching out over Jerusalem. So David and the leaders of Israel put on burlap to show their deep distress and fell face down on the ground. 17 And David said to God, “I am the one who called for the census! I am the one who has sinned and done wrong! But these people are as innocent as sheep—what have they done? O Lord my God, let your anger fall against me and my family, but do not destroy your people.”

In this story from the Bible, the sin of one man (David) led to a plague that caused the death of 70,000.  We see this highlighted in verse 14.  It doesn’t seem fair does it?  Even David was distressed by the consequences that his sin had on innocent people.  We see this from David’s response to God in verse 17.

Because of our culture of individualism in the Western hemisphere, we struggle to understand the Eastern tradition in which the head of a family, tribe or nation represented the people under them.  The members were treated as a whole, sharing in the blessings or punishments resulting from the actions of their leaders.  This is very different from our culture where each person is treated as an individual and are responsible for their own actions and not the actions of others.

We see many examples of this Eastern philosophy of the team throughout the Bible.

Adam’s sin had consequences for all of humanity.  We see this in the book of Romans.

12 When Adam sinned, sin entered the world. Adam’s sin brought death, so death spread to everyone, for everyone sinned.

When Achan sinned, God said Israel has sinned.  Joshua had to identify the tribe, clan and family to which the sinner belonged.  We see this story in the book of Joshua.

7 But Israel violated the instructions about the things set apart for the Lord. A man named Achan had stolen some of these dedicated things, so the Lord was very angry with the Israelites. Achan was the son of Carmi, a descendant of Zimri son of Zerah, of the tribe of Judah.

2 Joshua sent some of his men from Jericho to spy out the town of Ai, east of Bethel, near Beth-aven. 3 When they returned, they told Joshua, “There’s no need for all of us to go up there; it won’t take more than two or three thousand men to attack Ai. Since there are so few of them, don’t make all our people struggle to go up there.”

4 So approximately 3,000 warriors were sent, but they were soundly defeated. The men of Ai 5 chased the Israelites from the town gate as far as the quarries, and they killed about thirty-six who were retreating down the slope. The Israelites were paralyzed with fear at this turn of events, and their courage melted away.

6 Joshua and the elders of Israel tore their clothing in dismay, threw dust on their heads, and bowed face down to the ground before the Ark of the Lord until evening. 7 Then Joshua cried out, “Oh, Sovereign Lord, why did you bring us across the Jordan River if you are going to let the Amorites kill us? If only we had been content to stay on the other side! 8 Lord, what can I say now that Israel has fled from its enemies? 9 For when the Canaanites and all the other people living in the land hear about it, they will surround us and wipe our name off the face of the earth. And then what will happen to the honor of your great name?”

10 But the Lord said to Joshua, “Get up! Why are you lying on your face like this? 11 Israel has sinned and broken my covenant! They have stolen some of the things that I commanded must be set apart for me. And they have not only stolen them but have lied about it and hidden the things among their own belongings.

Getting back to our original story about David and the Israelites from 1 Chronicles; it would seem that in this case, it may have been Israel’s sin as a nation that led to David’s sin.  The Lord was angry with Israel before David was incited enough to take a census.  This is made clear in 2 Samuel.

24 Once again the anger of the Lord burned against Israel, and he caused David to harm them by taking a census. “Go and count the people of Israel and Judah,” the Lord told him.

For this reason, some see this as a plague upon a nation of people who had themselves sinned.

David’s sin deserved personal punishment, but David’s death might have been worse for the nation than the plague.  Political turmoil in Israel could have brought invading armies that would have killed even more people.  David suffered remorse and grief.  Along with the leaders who may have supported his call for a census, David mourned and repented.  God graciously forgave him and intervened to spare Jerusalem from impending destruction.  Later, the temple was built on the site where David offered his sacrifice that saw the plague halted.

When you look at the big picture of this story, we need to understand that God knows what is best for His people and He always has their best interests in mind.  We can look at the 70,000 people who died because of the sin of one man, but that is just a snapshot of the whole story.  We don’t see how many more might have died if those 70,000 hadn’t died.  We have a limited scope and vision of the whole story so it is hard for us to see.  If we did see the whole picture, we might think very differently about the situation.

The bottom line is that we need to learn to trust God, know that He knows best and stop questioning everything that happens.  I promise that the end of the story will be much better than the beginning or even the here and now.

Most of the people who visit this blog already know me so it is kind of pointless to try to describe my life in this short little blurb. What is the purpose of this blog is the question. Over the course of this last year I have been exposed to some amazing people and have made personal development an important focus of my life. Being successful, not by the world's standards, but by God's has become my main focus. Mainly, I want to work to develop myself as a person who is kinder, reaches out to help those in need, and truly makes a difference in this world. To this end I am constantly reading and am exposed to so many differnet things along the way. These have been amazing and it is helping me grow so much. Then I started to think, "Why am I being so selfish?" You need to share with others these amazing things you are learning and being exposed to. That is where this blog comes into play. As I am reading and experiencing things that are truly amazing and life changing, I will be posting them on this blog. Obviously, I will not be able to post everything in it's entirity, but I will be summarizing them and letting you know the source of the article or book they come from so you can check them out later if you wish. I want this blog to be a place where you can go to often and be inspired and leave here with a smile on your face. I will be covering all kinds of different topics dealing with success and personal development. Topics like taking action, relationships, living to your potential, reinventing yourself, finances, leadership, presenting, goal setting, time management, etc. I will also be occasionally including topics on cooking, music, and gardening because they are special interests of mine. As a little disclaimer, I have given my life to the Lord and he is #1 in my life. I am his servant and everything I do in life is for his glory. With that being said, religion influences all areas of my life. There will be references to God in this blog because I can't seperate God from this or any other area of my life. I want you to know that if you do not believe in God, that is fine. That is your choice. This blog is open to anyone who wants to better their life. I will not be trying to influence or pressure anyone into having a relationship with the Lord from this site. Please don't feel uncomfortable. You can just read the portions of the blog that you wish to. I am inviting you to go on a journey with me. We will learn together to be the kind of people we were designed to be. Anyone can make a difference in this world, but it starts%
View all posts by wmarsau →
This entry was posted in Accountability, Attitude, Change, Communication, Decisions, Forgiveness, God, Growth, Hope, Life Stories, Love, Relationships, Thoughts/Mindset, Worship and tagged 1 Chronicles, 2 Samuel, Achan, anger, consequences, David, Eastern, family, forgive, God, Israel, Israelites, Jerusalem, Joshua, killed, nation, plague, punishment, responsibility, Romans, sacrifice, SIN, suffering, temple, tradition, tribe, turmoil, Western. Bookmark the permalink.