Are You Willing to Carry Someone Else’s Cross? 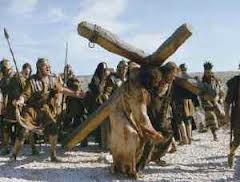 It is a five-minute walk between the traditional site of where Jesus was sentenced to die on the cross and Golgotha, where He was crucified the next day.  But for a man, as Jesus was, beaten nearly to death and forced to carry the 75 lb. horizontal beam of the cross, this journey could have easily taken up to half an hour.

When Jesus was making this journey, he could barely stand and the weight of the cross was too much for Him to bear.  When Jesus couldn’t carry His cross any farther, a man named Simon was enlisted from the crowd to carry the cross the rest of the way to Golgotha for Jesus.  We see this in 3 of the 4 gospels.

32 As they were going out, they met a man from Cyrene, named Simon, and they forced him to carry the cross.

21 A certain man from Cyrene, Simon, the father of Alexander and Rufus, was passing by on his way in from the country, and they forced him to carry the cross.

26 As the soldiers led him away, they seized Simon from Cyrene, who was on his way in from the country, and put the cross on him and made him carry it behind Jesus.

Simon was not a follower of Jesus.  He was merely a “passer-by.”  Simon had come to Jerusalem to celebrate the Passover and probably had many things to do that day as he made his way through the streets of the Holy City.  And then it happened: He was seized by a Roman soldier and pressed into service, forced to carry the beam of a convicted man’s cross.

Frightened and perhaps frustrated, Simon picked up the beam, slung it over his shoulder, balanced it there, and then sought to help the bloodied and beaten man.  Simon had no way of knowing the importance of this man.  The sooner he reached Golgotha, the sooner he could leave, go back to his tasks, and forget about the entire experience.

What Simon did not know was that this unexpected interruption to his otherwise busy day would ultimately the most profound and important experience of his entire life.  For in this interruption he had carried the cross for the King.

If you are anything like me, you get into the flow of your day and it can be very hard to be interrupted from what you are doing.  It’s not that I don’t want to help people or take the time to talk to them, it’s just that it takes away from things I had planned to do and instead of changing my plans, it is sometimes easier to just keep walking.  Easier yes, but the right thing to do, definitely not.

I can think of some times that I actually allowed myself to be interrupted.  When I saw someone in need of help and I stopped what I was doing and I helped them.  I don’t think it had any profound effect on the universe, but I really don’t know what impact or chain of events it caused.

I can also sadly think of many more times when I didn’t allow myself to be interrupted.  When I saw someone on the side of the road, but did not stop.  When I saw someone asking for change and instead of giving them money or having to tell them “no,” I moved to the other side of the street.  Times when a friend wanted to get together, but I told them I had a prior commitment, but I really could have made the time to see them.  It makes me very sad and disappointed in myself to think about how I could have been a positive impact in the world or really made a difference in someone’s life, but chose not to.  I have no idea the outcome of helping them might have been, but I will never know and those opportunities are now gone.

It makes me think that if I had been Simon and had been in Jerusalem that day, would I have been willing to carry the cross for Jesus?  If I knew it was Jesus and what was really happening, of course I would have.  If I didn’t know Jesus and he was just another guy, I might not have.  I might have just tried to avoid the crowd and went on with my plans for the day.  When I realize that, it makes me realize that my heart still has a long way to go to be a heart like Jesus had.

Each of us is presented with chances to help people each and every day.  Are we willing to stop and help or will we just go on with our days?  You never know when going out of your way can have a huge impact on a person.  Some of the greatest gifts we will ever give will not cost us a dime and may take only minimal effort on our parts.  If we are not willing to be interrupted though, we will never have that impact.  We can’t get back the opportunities that we have missed, but each day is a new day and we can take advantages of opportunities moving forward.

It is likely that Simon went on to become a follower of Christ.  Mark mentioned him and his sons, Alexander and Rufus, in a matter-of-fact fashion, assuming the Christians at Rome (the likely recipients of the Gospel) would know them.  They were leading figures of the church there.  In that frightening and burdensome interruption of Good Friday, Simon’s life would forever be changed.

Most of the people who visit this blog already know me so it is kind of pointless to try to describe my life in this short little blurb. What is the purpose of this blog is the question. Over the course of this last year I have been exposed to some amazing people and have made personal development an important focus of my life. Being successful, not by the world's standards, but by God's has become my main focus. Mainly, I want to work to develop myself as a person who is kinder, reaches out to help those in need, and truly makes a difference in this world. To this end I am constantly reading and am exposed to so many differnet things along the way. These have been amazing and it is helping me grow so much. Then I started to think, "Why am I being so selfish?" You need to share with others these amazing things you are learning and being exposed to. That is where this blog comes into play. As I am reading and experiencing things that are truly amazing and life changing, I will be posting them on this blog. Obviously, I will not be able to post everything in it's entirity, but I will be summarizing them and letting you know the source of the article or book they come from so you can check them out later if you wish. I want this blog to be a place where you can go to often and be inspired and leave here with a smile on your face. I will be covering all kinds of different topics dealing with success and personal development. Topics like taking action, relationships, living to your potential, reinventing yourself, finances, leadership, presenting, goal setting, time management, etc. I will also be occasionally including topics on cooking, music, and gardening because they are special interests of mine. As a little disclaimer, I have given my life to the Lord and he is #1 in my life. I am his servant and everything I do in life is for his glory. With that being said, religion influences all areas of my life. There will be references to God in this blog because I can't seperate God from this or any other area of my life. I want you to know that if you do not believe in God, that is fine. That is your choice. This blog is open to anyone who wants to better their life. I will not be trying to influence or pressure anyone into having a relationship with the Lord from this site. Please don't feel uncomfortable. You can just read the portions of the blog that you wish to. I am inviting you to go on a journey with me. We will learn together to be the kind of people we were designed to be. Anyone can make a difference in this world, but it starts%
View all posts by wmarsau →
This entry was posted in Attitude, Change, Communication, Easter, Evangelism, Hope, Image, Influence, Joy, Leadership, Leaving a Legacy, Life Stories, Love, Motivational, Opportunity, Purpose, Reinventing Yourself, Relationships, Serving, Thoughts/Mindset and tagged Bible, changing lives, cross, God, Good Friday, help influence, Jesus, opportunity, Simon. Bookmark the permalink.