For today’s featured song, I wanted to do something a little off the wall.  I present to you White Rabbit by Jefferson Airplane.  I think it is one of the strangest and most unusual songs ever written.  I think this song, more than any other sums up the late 60’s.

There has been a lot of confusion as to what the lyrics of this song are trying to say.  The references are to Alice in Wonderland, but it goes deeper than that.  This is not a song directly about Alice in Wonderland.  At the time this song was released, everything was very censored.  If the lyrics were literally stated, the song would have never been released on the radio and it would have never been heard.  No, the lyrics are a result of symbolism.  The Alice theme is representing something else, but what? 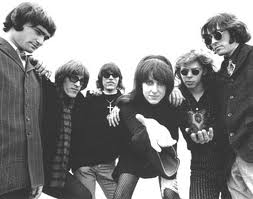 getting high.  That is a very easy conclusion to make, especially considering the large amount of drug use when this song came out.  It is an easy connection to make.  Alice is the drug user.  The white rabbit is the drug dealer or maybe one of the drugs itself like cocaine.  The mushrooms, well that kind of speaks for itself doesn’t it?  Despite all of this, I don’t think this song is about drugs at all.  What?

I think the thing being symbolized in this song was the Vietnam War and protesting the war.  That was a very controversial subject at the time as well and could not easily be spoken openly about.  Hence the symbolism.  Let me explain my reasoning.

One pill makes you larger……. This set of lyrics refers to the choice between protesting (making you a big person) versus joining the war (making you a small, ie insignificant person), and adding that your parents can do nothing to help you make the choice.  Go ask Alice when she’s ten feet tall refers to not fitting in and being disruptive as Alice does when she grows large in the book.

When the men on the chessboard get up and tell you where to go… this set of lyrics refers to when the military (chess pieces, ie knights, pawns etc. are military pieces) tells you to go to Vietnam (where to go at the time) and your mind is moving low refers to not knowing what to do.

Call Alice I think she’ll know: When logic and proportion have fallen sloppy dead… this set of lyrics is specifically about the Vietnam War.  It is referring to the large amount of men killed in the war (sloppy swamp setting) the white knight is talking backwards (he doesn’t talk backwards in the book) refers the United states army stating that it’s coming to the rescue not making sense, ie talking backwards, and the red queen refers to the communist who are killing all our men (off there heads)

This next line is a little confusing until you read the “who stole the tarts chapter” the line is remember what the dormouse said. This is confusing because it is referencing the Mad Hatter.  The Mad Hatter is on the witness stand and faces execution if he can’t “remember what the dormouse said.”  As a result he runs away before the queen of Hearts, ie the red queen has a chance to chop of his head.

Feed your head is not what the dormouse said.  It’s telling you to educate yourself.  You feed your head by learning.  Said twice for emphasis.  The last line is pleading with the listener to LEARN!LEARN!!

This song had to be written with symbolism, as it was telling people to dodge the draft.

Any thoughts on that interpretation of the song?

This song can really mean just about anything you want it to.  That is the beauty of symbolism and songs like this.  They are wide open to interpretation.

Getting past the lyrics, you find a very haunting melody, that just screams the psychadellic-era.  The first time I was ever exposed to the song was in the movie the Game starring Michael Douglas.  The song was intended to represent the madness going on in his head.  What a great song to do that with.

This song is just fantastic.  It is one of those time capsule songs that

represents a certain frame of time that will never be seen again.  We can remember that time through the song and what a better song to remember it with.  I hope you enjoy this song as much as I do.

Official music video of the song.

Live version from Woodstock in 1969.

Cover version of the song by Gillian Welch.  This is amazing!

Cover version of the song by Grace Potter and the Nocturnals.

“White Rabbit” is a song from Jefferson Airplane‘s 1967 album Surrealistic Pillow.  It was released as a single and became the band’s second top ten success, peaking at #8 on the Billboard Hot 100.  The song was ranked #478 on Rolling Stone‘s list of the 500 Greatest Songs of All Time, #75 on Rate Your Music‘s Top Singles of All Time, and appears on The Rock and Roll Hall of Fame’s 500 Songs that Shaped Rock and Roll.

“White Rabbit” was written by Grace Slick while she was still with The Great Society.  When that band broke up in 1966, Slick was invited to join Jefferson Airplane to replace their departed female singer Signe Toly Anderson, who left the band with the birth of her child.  The first album Slick recorded with Jefferson Airplane was Surrealistic Pillow, and Slick provided two songs from her previous group: her own “White Rabbit” and “Somebody to Love”, written by Darby Slick and recorded under the title “Someone to Love” by The Great Society.  Both songs became breakout successes for Jefferson Airplane and have ever since been associated with that band.

One of Grace Slick‘s earliest songs, written during either late 1965 or early 1966, uses imagery found in the fantasy works of Lewis Carroll: 1865’s Alice’s Adventures in Wonderland and its 1871 sequel Through the Looking-Glass, such as changing size after taking pills or drinking an unknown liquid.  It is commonly thought that these are also references to the hallucinatory effects of psychedelic drugs, such as LSD and psilocybin mushrooms. Characters referenced include Alice, the hookah-smoking caterpillar, the White Knight, the Red Queen, and the Dormouse.

For Slick and others in the 1960s, drugs were a part of mind-expanding and social experimentation.  With its enigmatic lyrics, “White Rabbit” became one of the first songs to sneak drug references past censors on the radio.  Even Marty Balin, Slick’s eventual rival in Jefferson Airplane, regarded the song as a “masterpiece”.  In interviews, Slick has related that Alice in Wonderland was often read to her as a child and remained a vivid memory into her adult years.

Set to a crescendo similar to that of Ravel’s famous Boléro, as used in the Miles Davis and Gil Evans album Sketches of Spain, the music combined with the song’s lyrics strongly suggests the sensory distortions experienced with hallucinogens, and the song was later used in pop culture to imply or accompany just such a state.

the song, the references differ from Lewis Carroll’s original text, wherein the White Knight does not talk backwards and it is the Queen of Hearts, not the Red Queen, who says “Off with her head!”

The last lines of the song are: “Remember what the Dormouse said. Feed your head.  Feed your head.” Although commonly interpreted as quoting the Dormouse, the lines may instead refer to Alice’s Adventures in Wonderland, Chapter XI: “Who Stole the Tarts”, wherein a very nervous Mad Hatter is called to testify:

‘But what did the Dormouse say?’ one of the jury asked.
‘That I can’t remember’, said the Hatter.

The song was covered in the following years:

“White Rabbit” has been used in numerous films and television shows.

Most of the people who visit this blog already know me so it is kind of pointless to try to describe my life in this short little blurb. What is the purpose of this blog is the question. Over the course of this last year I have been exposed to some amazing people and have made personal development an important focus of my life. Being successful, not by the world's standards, but by God's has become my main focus. Mainly, I want to work to develop myself as a person who is kinder, reaches out to help those in need, and truly makes a difference in this world. To this end I am constantly reading and am exposed to so many differnet things along the way. These have been amazing and it is helping me grow so much. Then I started to think, "Why am I being so selfish?" You need to share with others these amazing things you are learning and being exposed to. That is where this blog comes into play. As I am reading and experiencing things that are truly amazing and life changing, I will be posting them on this blog. Obviously, I will not be able to post everything in it's entirity, but I will be summarizing them and letting you know the source of the article or book they come from so you can check them out later if you wish. I want this blog to be a place where you can go to often and be inspired and leave here with a smile on your face. I will be covering all kinds of different topics dealing with success and personal development. Topics like taking action, relationships, living to your potential, reinventing yourself, finances, leadership, presenting, goal setting, time management, etc. I will also be occasionally including topics on cooking, music, and gardening because they are special interests of mine. As a little disclaimer, I have given my life to the Lord and he is #1 in my life. I am his servant and everything I do in life is for his glory. With that being said, religion influences all areas of my life. There will be references to God in this blog because I can't seperate God from this or any other area of my life. I want you to know that if you do not believe in God, that is fine. That is your choice. This blog is open to anyone who wants to better their life. I will not be trying to influence or pressure anyone into having a relationship with the Lord from this site. Please don't feel uncomfortable. You can just read the portions of the blog that you wish to. I am inviting you to go on a journey with me. We will learn together to be the kind of people we were designed to be. Anyone can make a difference in this world, but it starts%
View all posts by wmarsau →
This entry was posted in Music and tagged Grace Slick, Jefferson Airplane, music, Psychadelic, rock n roll. Bookmark the permalink.