The Cyclones had a world of opportunities for charting uncharted territory for the Paul Rhoads era if they could find a way to beat West Virginia.  They could accomplish a winning regular season for the first time.  They could get 4 Big 12 conference wins in one season for the first time.  They could also move up in the bowl hierarchy.  Unfortunately, the Cyclones were not able to capitalize on opportunities that they had in this game to pull out the win and ended up losing a very close game 31-24 to the Mountaineers.

It was a very cold game with a strong wind from the north that made the game feel even more cold.  Despite the cold weather, 53,792 fans showed up to watch their beloved Cyclones.  That figure set a new average attendance record for the Cyclones at an average of 55,274 fans that attended each game.  The previous record was set last year with an average of 53,647 fans.  Great job Cyclone fans!  Way to show your support! 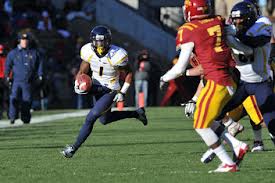 make your heart-sick as a coach, player, or a fan.  The reason we do is so that we can learn from them so when these opportunities come around again, we can capitalize on them and hopefully they will make a difference in another game.  That is how improvement is made and it is just part of the learning process.

On offense, we had 396 yds of offense (234 yds rushing, 162 yds passing).  I thought that we ran the ball fairly well at times.  Jeff Woody ran the ball 7 times for 38 yds, James White ran the ball 8 times for 31 yds, and Shontrelle Johnson ran the ball 8 times for 25 yds.  QB Sam Richardson was the big rusher on the day rushing the ball 18 times for 119 yds.  He became our first 100 yd+ rusher in a game since Johnson did it in the first game of the season against Tulsa.  I thought Sam did a good job of running the ball, but at the same time, I thought he was a little quick to run the ball in his decision-making process.  I thought there were several plays where he would have been better served to have tried to stay in the pocket longer and waited for receivers to open up.

While Sam Richardson did not have as good of a game as he did against Kansas last week, he still had an outstanding performance.  It was definitely good enough to get us a win.  In addition to his 119 yds on the ground, Sam was 13 for 31 on passes for 162 yds.  He threw 3 TDs and no interceptions.  On his two game career, he has thrown 7 TDs and no interceptions, which will always give us a chance to win.  I do think that the passing numbers are a little deflated because with the high winds in this game, it was not a game to pass the ball a ton.  Sam Richardson still has plenty of room for improvement, but he is a QB who does not make a lot of mistakes and he has a very strong and accurate arm, which will give him the opportunity to be our QB for the next 3 seasons.

I thought our WRs played pretty well overall.  Josh Lenz was again strong and had 4 catches for 48 yds.  He probably played the best of our receivers on the day.  Bundrage had 2 catches for 44 yds, Young had 2 catches for 22 yds, and Jerome Tiller had 2 catches for 20 yds.  Tiller had his first TD reception of his Cyclone career and it is just unfortunate that he had to wait all the way until his last home game as a senior to do it.  It was a tough day for throwing the ball so it is hard to judge the WR performance solely on statistics.

I thought that overall, the OL played a pretty solid game.  They

opened some pretty good-sized holes for our running backs and their pass protection was pretty solid.  As I said earlier, I thought there were times Richardson could have stayed in the pocket longer because the line was giving him time to throw the ball.  The OL has played much better the last couple of weeks and they will need to have a big game in the bowl game so we can get to our 7th win of the season.

We lost the time of possession battle again in this game, but it was pretty even which is good.  West Virginia had the ball for 31:34 and ISU had the ball for 28:26.  He has improved greatly in this area the past two games.  We were only 8 of 19 on third down conversions.  This is an area we need to improve in.  I do think that the wind was a little bit of a factor in that stat though as well.

West Virginia came in with one of the best offenses in the country.  I thought our defense did a good job of stopping them at times, but there were time when they made our defense look silly.  The Mountaineers had 475 yds of offense (239 yds rushing, 236 yds passing).  Geno Smith had a very good day passing the ball 21 for 31 for 236 yds and 2 TD and O INTs.

I thought our DL played well at times getting some pressure on Smith, but we just could not sustain that pressure on enough plays in this game.  One DL really stood out to me.  I thought that Cleyon Laing played his best game as a Cyclone with 7 tackles, 5 of those for solo tackles.  He also had 1 sack and 1 1/2 TFLs.

LB AJ Klein had a very solid game ending as the leading the Cyclones with 14 tackles.  I also thought that backup safety Gage Shaeffer played a solid game racking up 13 tackles.  We played tough, but it is hard when you have three starters on defense out due to injury.  Durrell Givens, who leads the nation with 9 takeaways, did not play in this game.  LB Jake Knott is out and CB Jansen Watson did not play in this game either.  I am not one to make excuses for having injured players, but not having these players definitely hurt us in this game.

I thought that West Virginia did an outstanding job of running the ball and that really hurt us.  Alston was their leading rusher with 19 runs for 130 yds.  Austin ran the ball 14 times for 74 yds.  We needed to stop their run game first and then try to force them to pass the ball more and we just couldn’t get that done on this day.

I felt that the adverse weather conditions affected the Mountaineers much less than it did us.  I thought West Virginia had a lot of success passing the ball when they had to.  Austin had 6 catches for 99 yds.  The 75 yd TD catch/run was devastating.  Bailey had 7 catches for 82 yds.  Woods had 6 catches for 43 yds.

There is no doubt that it was going to take an unbelievable defensive effort to win this game.  The problem was that we only got an average effort.  Our defense is capable of playing better and they will have to in the bowl game to get a win.

I thought our special teams played a really outstanding game.  West Virginia did return a punt for a TD, but luckily a penalty called it back and took it off the board.

Kirby VanDerKamp did an outstanding job punting against a stiff wind most of the afternoon and even converted on a 4th down when we went for it.  He provided a great spark to our team.  Kirby had 4 punts for 138 yds, a 34.5 yd average.  His long punt of the day was for 47 yds.

Edwin Arceo had another good day kicking.  He missed a 47 yd FG attempt into the wind that clanked off the upright, but them came back and kicked a clutch 49 yd FG to put us up by one.  Despite his early season struggles, he has shown great improvement and shown that he can be a winning kicker for our program moving forward.

Despite the disappointment of ending the regular season at 6-6, this team is still going to a bowl game.  Going to a bowl game in 3 out of the past 4 seasons is huge for this program.  We have definitely made great strides this season, but we still have a long way to go.  We are right on the cusp of having a break through year.  It can be frustrating to know we are that close and not get the win, but the process takes time and when we do get there, it will make it all that much more sweet.  I look forward to the bowl game and success for many seasons to come.  Go Cyclones!

Most of the people who visit this blog already know me so it is kind of pointless to try to describe my life in this short little blurb. What is the purpose of this blog is the question. Over the course of this last year I have been exposed to some amazing people and have made personal development an important focus of my life. Being successful, not by the world's standards, but by God's has become my main focus. Mainly, I want to work to develop myself as a person who is kinder, reaches out to help those in need, and truly makes a difference in this world. To this end I am constantly reading and am exposed to so many differnet things along the way. These have been amazing and it is helping me grow so much. Then I started to think, "Why am I being so selfish?" You need to share with others these amazing things you are learning and being exposed to. That is where this blog comes into play. As I am reading and experiencing things that are truly amazing and life changing, I will be posting them on this blog. Obviously, I will not be able to post everything in it's entirity, but I will be summarizing them and letting you know the source of the article or book they come from so you can check them out later if you wish. I want this blog to be a place where you can go to often and be inspired and leave here with a smile on your face. I will be covering all kinds of different topics dealing with success and personal development. Topics like taking action, relationships, living to your potential, reinventing yourself, finances, leadership, presenting, goal setting, time management, etc. I will also be occasionally including topics on cooking, music, and gardening because they are special interests of mine. As a little disclaimer, I have given my life to the Lord and he is #1 in my life. I am his servant and everything I do in life is for his glory. With that being said, religion influences all areas of my life. There will be references to God in this blog because I can't seperate God from this or any other area of my life. I want you to know that if you do not believe in God, that is fine. That is your choice. This blog is open to anyone who wants to better their life. I will not be trying to influence or pressure anyone into having a relationship with the Lord from this site. Please don't feel uncomfortable. You can just read the portions of the blog that you wish to. I am inviting you to go on a journey with me. We will learn together to be the kind of people we were designed to be. Anyone can make a difference in this world, but it starts%
View all posts by wmarsau →
This entry was posted in Iowa State Football and tagged bowl game, Cyclones, football, Iowa State, Mountaineers, sports, West Virginia. Bookmark the permalink.